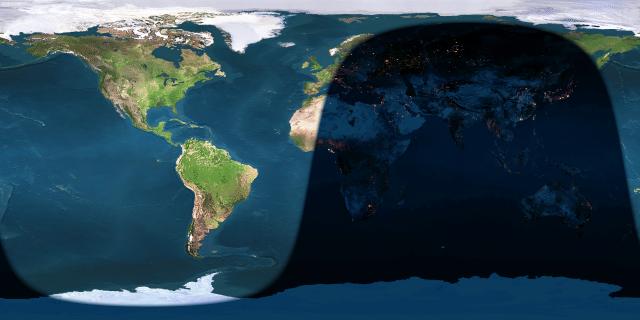 Latest CDXA News
If you have news that you think needs to be added to the News box, send it to cdxa.w4dxa@gmail.com for review and posting.
For News Box archive, click
added 2/26/2021

Unfortunately, several setbacks in the recovery from the COVID-19 pandemic make necessary the difficult decision to cancel Hamvention 2021. Hundreds of volunteers have been working to do everything necessary to bring this Hamvention to the many amateur radio enthusiasts and vendors who support the Dayton Hamvention.
Vaccine distribution both in the United States and around the world is lagging behind what was planned. In addition, the emergence of a more communicable form of the COVID-19 virus increases the potential for further public health problems in the next few months. We make this difficult decision for the safety of our guests and vendors. Those who had their tickets deferred last year will be deferred again. Stay tuned for information about a QSO party for the Hamvention weekend. We’ll be back next year!!! Executive Committee, Dayton Hamvention 2021
added 12/30/2020 Ham License fee Excerpt from FCC Report and Order...dated 29, December 2020.... " After reviewing the record, including the extensive comments filed by amateur radio licensees and based on our revised analysis of the cost of processing mostly automated processes discussed in our methodology section, we adopt a $35 application fee, a lower application fee than the Commission proposed in the NPRM for personal licenses, in recognition of the fact that the application process is mostly automated.[1] Complete Docket can be found . Paragraph 42 and the preceding paragraphs detail the arguments.
added 12/30/2020 CDXA Officers for 2021
added 11/6/2020
Charlotte Hamfest 2021

The Mecklenburg Amateur Radio Society has canceled the Charlotte Hamfest scheduled for March 12th & 13th, 2021. We are deeply disappointed! We will be focusing on the 2022 Charlotte Hamfest when we hope we will be able to bring you the quality, multidimensional hamfest that you’ve come to enjoy.
The COVID pandemic has brought such uncertainty regarding how and if the Charlotte Hamfest could be held next spring that we realized that the event would fall short of everyone’s expectations. We don’t want to put on an event that is less than you deserve. Plan to join us March 11th & 12th, 2022 when we all will have an exciting and good time. I know that many of us are extremely disappointed, including me, but after last year's experience we need to face the reality that we couldn't bring together 1,600+ participants in the ways that we enjoy so much. The Cabarrus Arena & Event Center has been extremely helpful. We'll look to 2022! Steven Burke KI4FAQ MARS President
added 7/14/2020

Because of many of our CDXA members being in the higher risk category, and requirements for social distancing. The CDXA board is very cautious about the health and welfare of our members, so we will not officially restart our Wednesday CDXA lunches until the NC State government officials restore 100% restaurant occupancy with no restrictions. Please remember if you're in the area the restaurant also does take out. Support "Skyland Family Restaurant" Stay safe and well. Eric Sossoman / K4CEB VP
Updated 11/24/2019

CDXA has moved from the 'Mailman' email reflector to 'groups.io' email reflector for our email service. If you are a CDXA member and have not yet signed up for the CDXA groups.io reflecter, you can signup here.
Reason for the change is because the 'mailman' reflector does not have the ability to send images, attachments and sometimes links. The 'Groups.io' email reflector gives us the ability to add images, attachments, links, etc. to emails going out to all members. It also gives us some new tools like polls, etc Previous an email was sent to all CDXA members inviting you to join the CDXAMembers@Groups.io. All CDXA members joining the CDXAMembers@groups.io must be approved before you can use it. The approval process is an unfortunate necessity given people who would abuse the service.
Posted 5/27/2019

We need your help if your call sign begins with W4, K4 or N4. The Carolina DX Assocaiation is the sponsor for the 4th area incoming QSL bureau. The QSL bureau is staffed by vounteers. How can YOU help? Make sure you have envelops or funds on file with your sorter. If you do not want bureau QSL cards, then please let your sorter know that as well. Who is your sorter?
Go to https://www.cdxa.org/w4qsl-bureau/index.php Enter your call sign in the blank box next to "Submit Query" and press ENTER. If your sorter has put your data on line (about half of the sorters have) you will immediately find out the status of your QSL file. If you sorter has NOT put your data on line or if you want additional information, your sorter's email address is there. You can click on the link and send an inquiry to your sorter. The number one frustration that I hear from our sorters is when they receive incoming QSL cards and there are no envelopes, funds or instructions from you about how you want your cards handled. So once again, help our volunteers by making your wishes known. We have tried to make it easy for you to tell us what to do with your cards. Go to the link above. Scroll down the page and you will find ways to get envelopes on file with the bureau. I thank you in advance for your halp and your sorters will be pleased as well Paul Sturpe, W3GQ QSL Bureau Mgr. 4th Call Area W4 K4 N4 Prefixes
Updated 9/292019

ARRL members — including foreign members, QSL Managers, or managers for DXpeditions — should enclose payment as follows: $2 for 10 or fewer cards in one envelope. $3 for 11-20 cards in one envelope, or 75 cents per ounce, for packages with 21 or more cards. [For example, a package containing 1.5 pounds of cards -- 24 ounces, or about 225 cards -- will cost $18.] Under the new fee structure, there are no transaction service fees.
You should use an accurate scale to weigh your cards. Most post offices have scales that you may use. Please pay by check (or money order) and write your call sign on the check. Send cash at your own risk. DO NOT send postage stamps or IRCs. Please make checks payable to: “The ARRL Outgoing QSL Service.” Packages received with insufficient payment will not be processed until the balance is paid in full. The outgoing QSL bureau does not keep money on account. For complete information see .
updated 2/16/2017
Do you use Amazon.com for any of your online shopping? If so, make your default link to amazon.com. Any items bought using this link gives a small donation to the Carolina DX Foundation. Thanks.
Updated 9/25/2016
Help CDXA Support DXPeditions by renewing your membership or joning ARRL through CDXA. If your ARRL renewal/membership application is sent to the ARRL by CDXA, CDXA is able to retain a small portion of your ARRL application/renewal dues. Click for more information and the Renewal Form to print, complete and and send to CDXA.
CDXA Calendar of Evevts

Yaesu DR-1X in 2015. Read about the changes HERE .
CDXA Pileup Newsletters
Search back issues of the Pileup.
About CDXA

Make your donation using paypal or your credit card here.

Read about the CDXF
HERE

CANCELLED UNTIL FUTHER NOTICE
Every Wednesday
11:30 AM until
at 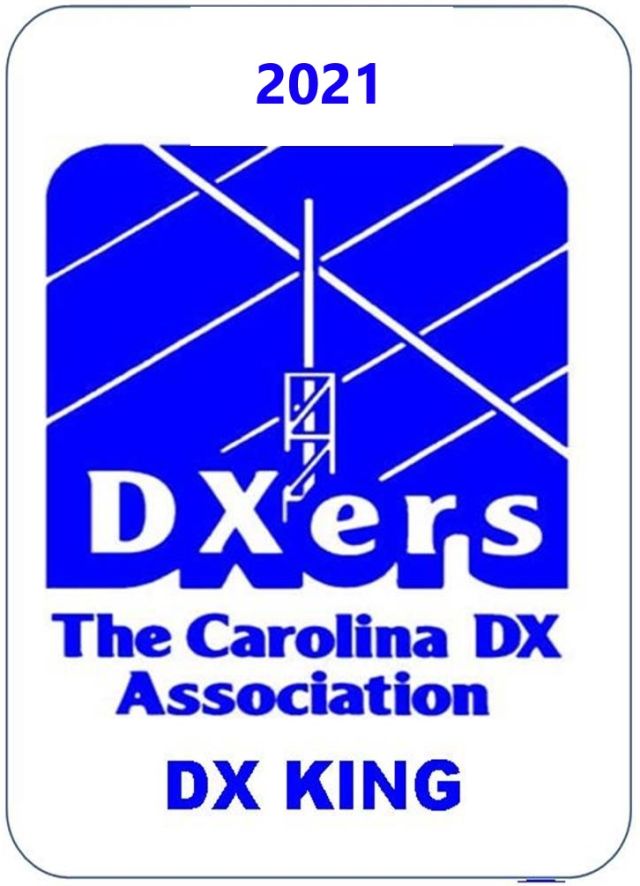 CDXA members participating in the DX King contest,
to enter your score, 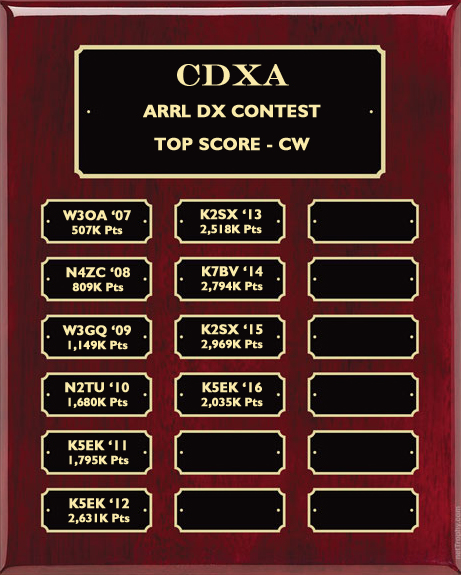 Honor Roll Status as of Nov 1, 2020.
All numbers are taken from the ARRL website

VUCC Stading as of Nov 1, 2020.
All numbers are taken from the ARRL website 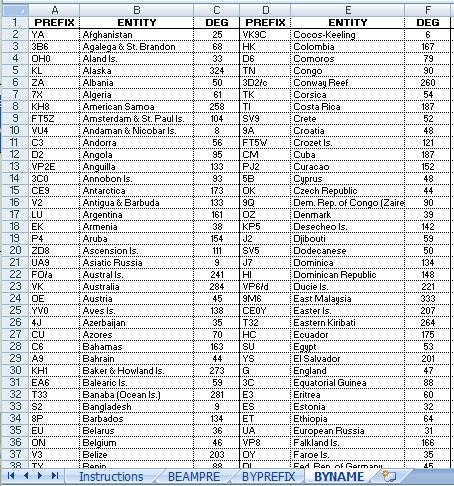